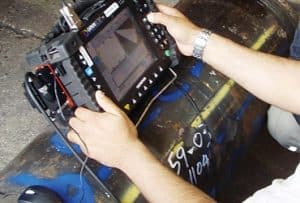 NDT methods rely upon use of electromagnetic radiation, sound and other signal conversions to examine a wide variety of articles (metallic and non-metallic, food-product, artifacts and antiquities, infrastructure) for integrity, composition, or condition with no alteration of the article undergoing examination. Visual inspection (VT), the most commonly applied NDT method, is quite often enhanced by the use of magnification, borescopes, cameras, or other optical arrangements for direct or remote viewing. The internal structure of a sample can be examined for a volumetric inspection with penetrating radiation (RT), such as X-rays, neutrons or gamma radiation. Sound waves are utilized in the case of ultrasonic testing (UT), another volumetric NDT method – the mechanical signal (sound) being reflected by conditions in the test article and evaluated for amplitude and distance from the search unit (transducer). Another commonly used NDT method used on ferrous materials involves the application of fine iron particles (either suspended in liquid or dry powder – fluorescent or colored) that are applied to a part while it is magnetized, either continually or residually. The particles will be attracted to leakage fields of magnetism on or in the test object, and form indications (particle collection) on the objects surface, which are evaluated visually. Contrast and probability of detection for a visual examination by the unaided eye is often enhanced by using liquids to penetrate the test article surface, allowing for visualization of flaws or other surface conditions. This method (liquid penetrant testing) (PT) involves using dyes, fluorescent or colored (typically red), suspended in fluids and is used for non-magnetic materials, usually metals.

This will close in 0 seconds